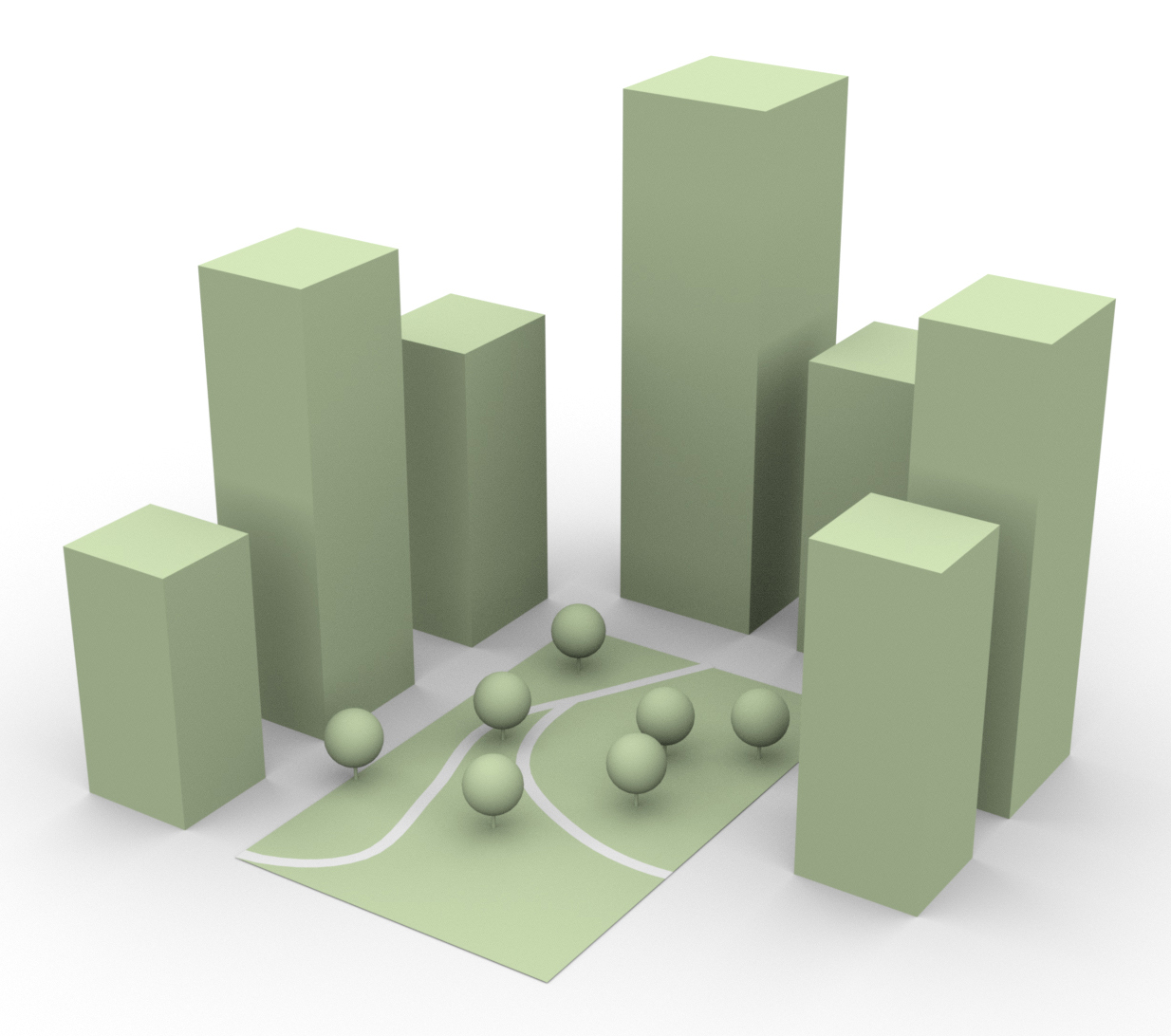 Open space, for the purposes of urban Securipedia, is broken into the following archtypes:

Hereinafter, wherever an aspect specific to one of these archetypes is described, the corresponding icon will be displayed.

Well-designed and maintained open and civic spaces can give an area a sense of identity and character, and provide a focal point for a community. These spaces also act as a forum for community activities. In addition, green open spaces also have environmental benefits, providing a habitat for local wildlife and a natural filter for air pollutants. In particular, open and civic spaces can contribute to increasing resilience and reducing vulnerability of urban communities, by aspects such as the following:

At the same time, open and civic spaces are part of urban infrastructure that can also attract hazard, such as crime, violence, or vandalism. In responding this at the level of urban planning, it is important to consider social mechanisms of risk perception and perceived needs to protect infrastructure, since these may considerably differ from professional risk assessments. Security-related urban planning that addresses open and civic space should therefore include citizen participation-based methods.

Providing the urban environment with goods and services such as recreation, tourism, cultural inheritage, food, drinking water, and safety against natural threats, open and civic space are major contributors to the public well being. Hence, open and civic space create a positive economic impact such as:

Moreover, open and civic space can be regarded as a public asset that in time will increase in value, in contrast to many other urban developments. The economic impacts can be estimated with the help of economic tools/techniques. However, some of these benefits are not easy to measure though and one easily double-counts effects.

Most of the security threats are crime related (e.g., vandalism, assault, robbery, etc.). Crime generates costs in anticipation of crime (e.g. locks, surveillance, etc.), as a consequence of crime (loss of property) and in response to crime (police investigation, legal system, etc.). Indirectly, crime has (amongst others) an impact on, for example, the local real estate value in the area around the open and civic space[1].

Security measures have an economic impact (in terms of costs and benefits) which can be considerable. Another way to enhance security is by design, e.g. the designing out approach, or as an aspect of sustainable design, which seeks a balanced consideration of social, economic, cultural and environmental aspects in urban design[2]. In general, these measures demand larger investments than traditional security measures, but at the same time they are able to avoid future costs due to the long-term prevention of crime.

The scale of open space should be aligned with the level of attraction and accessibility (e.g. a large regional park should be proximate to a major transport interchange to facilitate use and visitation by large numbers).

Recreational open spaces are mostly visited by pedestrians and cyclists. Walking and cycling paths and bicycle parking places should be available in order to facilitate vulnerable road users and direct these flows of people.

The open character of open and civic spaces may prevent crime; cul-de-sacs and roads/paths and parking places near dark corners should be avoided.

As social facilities will typically involve gatherings of people, they can sometimes be very busy. The ability for the people to get to safety in time in the event of an incident (Evacuation Management) can therefore be an important safety aspect.

Safety in all its forms, is an important function for the perceived quality of these environments. The presence of children in open and civic space further elevate the required safety standards. However well as these environments are designed to provide safety, the safety function can be deteriorated by crime. Examples of crime deteriorating safety are:

As open and civic space often also provide the function of connecting different parts of the urban area, traffic safety would be relevant.

Crimes most relevant to open and civic space, are:

The measures for each type of security issue can be found on the respective pages. There are few measures that are specifically suited or unsuited to this kind of urban object, but some general considerations can be mentioned:

Below may be surplus to requirements