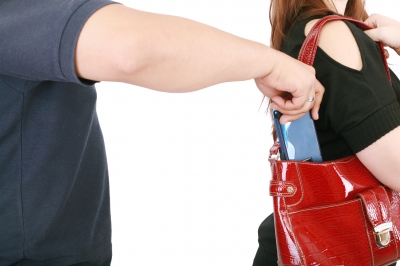 Lifting a wallet from a handbag without being noticed, a classic example of pickpocketing

Pickpocketing is a form of theft that involves the stealing of valuables from a person without him noticing the theft at the time.

Pickpocketing is an issue that is especially present in large cities, where crowds of people are present and distractions are plentiful. Although Barcelona and Rome were recently singled out as being particularly dangerous pickpocketing havens.[1][2][3], pickpockets may be found in any crowded place on the globe.

Known circumstances to influence the likelihood or effect of pickpocketing, are presented in the table below:

Pickpocketing can increase citizens' perception of insecurity. Urban environments with a high rate of pickpocketing will be seen as less attractive places for the public to frequently visit. Public transport nodes and services, together with areas where there are large crowds (such as busy shopping streets or market squares), can become less comfortable places to be when users are aware there is a high rate of pickpocketing. Some strata of society are targeted more often by pickpockets others. Tourists for example are often victems of pickpocketing due to a lack of familiarity with the area, the societal context, and to a likelihood of their attention being distracted (e.g. taking photographs).

Property crimes such as pickpocketing lead to considerable costs in both a direct (primary) and a indirect (secondary) way[7]. Direct costs of pickpocketing come in the form of:

In addition, pickpocketing on a large scale could lead to secondary economic impact, but these effects are relatively minor compared to more serious types of crime. Nevertheless, a growing amount of local authorities vying (competing) for tourism and investment on an (inter)national level, are increasingly focused on the prevention and prosecution of petty crimes like pickpocketing (in order to stimulate tourism or at least to prevent a decline due to a bad reputation). Like with most types of crime, the success of these authorities is above all a matter of perceived success, rather than actual success.

Like street robbers, pickpockets are difficult to deter. They have a lot of crime opportunities and pickpocketing does not require much planning or skill (although some are really skilled technically spoken). On top of that, pickpockets will adapt quickly to preventive security measures in accordance with the economics of criminal behaviour. Pickpockets will, for example, use accomplices to distract the potential victim, or use disguises to avoid cameras.

There is a high rate of pickpocketing at several mobility related locations, such as public transport nodes and services (especially train and metro stations), together with areas where there are large crowds (such as busy shopping centres or shopping streets or market squares). The risk is increased when there are large crowds, tourists, and hiding and fleeing options for pickpocketers. For example, a pickpocketer in a metro station can flee with (another) metro easily after the robbery.

In order to reduce the risk, one can use surveillance by mounting camera's inside stations and create awareness of the travellers, for example with warning posters and warning broadcasting inside trains. Also guards can be deployed inside stations and trains.

Also crowd management measures may be used to reduce risk of pickpocketing, e.g. by better directing flows of people, flows can be structured and the density of crowds can be reduced.

Pickpocketing has very little impact on the safety of people.

Potential measures that can mitigate the likelihood or impact of pickpocketing include: