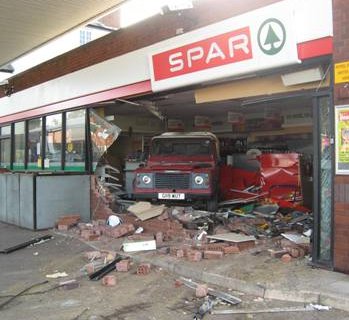 Results of a ram raid

Ram raid is a particular technique for burglars to gain access to, primarily, commercial premises by means of driving - usually stolen - vehicles into locked or closed entrances, exits, windows, or walls.

This act is occurring at least since the mid 1930s. The term came into widespread use after a series of such raids in Belfast in 1979 which were covered in news reports, and in countries such as Australia it inspired series of similar crimes.

Notably, large trucks are used to break into technology companies and steal high-value equipment for resale on the black market.[1]

Out of town retail parks and industrial parks are often targets after day time business hours due to their desertedness, together with the relatively high-value products often on sale (e.g. electronics).

Known circumstances to influence the likelihood or effect of ram raid are presented in the table below:

Ram raid fuels the black economy by facilitating stolen goods to be sold illegally. This has an impact on revenue achieved by national governments, and could also have an impact on provision of social service/welfare.

The economic impact of a ram raid is comparable to the economic impact of a robbery or a normal raid. Apart from the lost revenues, merchandise, the direct costs of ram raids are primarily the result of physical and emotional harm inflicted to employees and employers. But the very nature of a ram raid also implies high repair cost, including the cost of clearing up and the need for temporary security measures (guards). Moreover, potential victims will try to prevent a ram raid, investing time and money in preventative security measures like physical barriers and security equipment. In addition, the public authorities will respond to violent crime like ram raids with detection and prevention, prosecution, trial and detention, etc. The economic impact of ram raids can be measured with the help of economic tools.

Violent crime like ram raids cause economic damage to the economy as a whole (the secondary economic impact). A high frequency of raids, robberies and ram raids can, for example, have a negative influence on local business, property value, tourism, and quality of life (social capital).

Security measures mitigate the economic costs of security threats, but also demand investment in time and money such as security costs (cameras, guards) or the increase in distribution costs as a result of a limited accessibility. On top of that, certain security measures like closed roller shutters (that do not create a welcome environment) can reduce the quality of the area and have a negative effect on business. These so-called indirect economic impact of security measures are explained in more detail elsewhere in Securipedia.

A location or building has a higher risk for ram raid when it is easily accessible by large vehicles (trucks, vans). In order to prevent ram raids, locations which are more likely to suffer from ram raids (banks etc.) can be protected against ram raid by making it less accessible to (large) vehicles, for example by placing bollards.

However, that would have an impact of the mobility and accessibility in general of that area. For example, one could lower the accessibility of a street for large trucks by putting a barrier on a certain height which allows person cars but not larger trucks or buses, or by making the street narrower. That would also have an impact on the accessibility of e.g. normal public transport (buses) or delivery of goods to shops with trucks. This can be an undesirable side effect of such measures on mobility. With bollards, this effect can be reduced by using movable bollards which can be folded flat to permit certain vehicles to drive over them.

As ram raid is actually a form of burglary, not robbery, the act is usually performed when the shop is unattended, thus ruling out accidental injuries to the personnel. The damage to the shop is usually extensive, which has direct consequences for the extent the shop is able to perform its safety functions, such as

Potential measures that can mitigate the likelihood or impact of breaking and entering include: