A bollard is a short vertical post. Originally it meant a post used on a ship or a quay, principally for mooring. The word now also describes a variety of structures to control or direct road traffic, such as posts arranged in a line to obstruct the passage of motor vehicles.[1] In Securipedia, the meaning of the word bollard is limited to bollards meant to direct flows of traffic.[2][3]

Bollards used to contribute to safety and security are extensive. The American Bar Association(ABA) state that bollards are used to contribute to homeland security.[4] Also the NIBS’s site—the Whole Building Design Guide (WBDG)—recommends in its Design Guidance that open spaces surrounding and contiguous to buildings be included as integral parts of a security design.[5] See Crime prevention through environmental design for more.

In the security industry physical site security bollards have assumed a prominent role, of which there are two main kinds:

According to the National Institute of Building Sciences, non-crash resistant bollards are "perceived impediments to access" and address the actions of two groups.

A bollard in City of London colours

Bollards are rigid posts that can be arranged in a line to close a road or path to vehicles above a certain width or to separate traffic from pedestrians.[8] In the Netherlands, the city of Amsterdam became notorious for its Amsterdammertje.

The American Heritage Dictionary describes this use of bollard as "chiefly British", although the term has crept into the jargon of some American universities where dense traffic necessitates the use of bollards for access control.

Bollards can be mounted near enough to each other that they block ordinary cars, for instance, but wide enough to permit special-purpose vehicles, and bicycles through. Bollards can be used to enclose car-free zones: Removable bollards allow access for service and emergency vehicles. Bollards and other street furniture are used to control overspill parking onto side walks and verges.[9]

Tall (1.15 meter/4 foot) slim (10 cm/4 inch) fluorescent red or orange plastic bollards with reflective tape and removable heavy rubber bases are frequently used in traffic management where traffic cones would be inappropriate due to their width and ease of movement. Also referred to as delineators, the bases are usually made from recycled plastic, and can be easily glued to the road surface to resist movement following minor impacts from passing traffic. Sometimes called "T-top bollards" from the T-bar moulded into the top for tying tape, the bollard is an economical, cost effective, and safe delineation system designed especially for motorways and busy arterial roads. In conjunction with plastic tape, it is also effective in pedestrian control.

Bollards may be hinged at ground level, allowing them to be folded flat to permit vehicles to drive over them. In such cases they are generally fitted with padlocks at the base, to prevent their being lowered without proper authorisation.

Rising bollards can be retracted into the roadway to allow traffic to pass, or deployed to stop it.

Retractable or "rising" bollards can be lowered entirely below the road surface (generally using an electric or hydraulic mechanism) to enable traffic to pass, or raised to block traffic. Rising bollards are used to secure sensitive areas from attack, or to enforce traffic rules that are time related or restrict access to particular classes of traffic. They are increasingly common around the world to hinder vehicle-based terrorist actions from achieving close proximity to buildings, and are also used to prevent ram-raiding such as in the 2007 Glasgow International Airport attack. They are also useful in mixed-use public spaces, which support both pedestrian use and emergency and or service vehicle use. These bollards are usually priced between $11,000 to $100,000 depending on its ability to ram vehicles based on speed. The most expensive bollards can stop vehicles at speeds of about 50mph (80 Km/h).

Manually retractable bollards (lowered by a key mechanism) are found useful in some cases since they do not require retrofitting into existing landscapes, or any electrical hookups or hydraulic systems.[10]

The term "robotic bollards" has been applied to traffic barricades capable of moving themselves into position on a roadway.[11]

Self-righting bollards can take a nudge from a vehicle and return to the upright position without causing damage to the bollard or vehicle. They are popular in car park buildings and other areas of high vehicle usage. 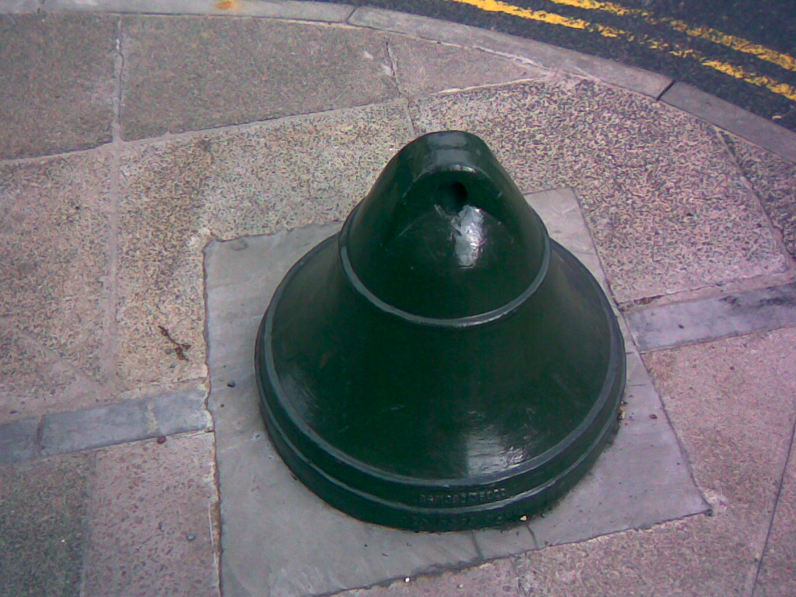 A bell bollard is especially useful to deflect heavy vehicles.

A bell bollard is a device that deflects vehicles' tires. The wheel mounts the lower part of the bollard and is deflected by its increasing slope. Such bollards are effective against heavy goods vehicles that can damage or destroy other types of street furniture.[12]