Access control is the measure of reduction of risk by regulating and controlling the flows of traffic into and out of an area or object.

Access control encompasses all modes of traffic. The aim of access control is to determine who can or can't enter a particular area. This discrimination can be done on various characteristics such as whether one possesses a a ticket, has registered in advance, the time of day, the place of entry, the mode of transport, etcetera.

Boom barrier at a parking 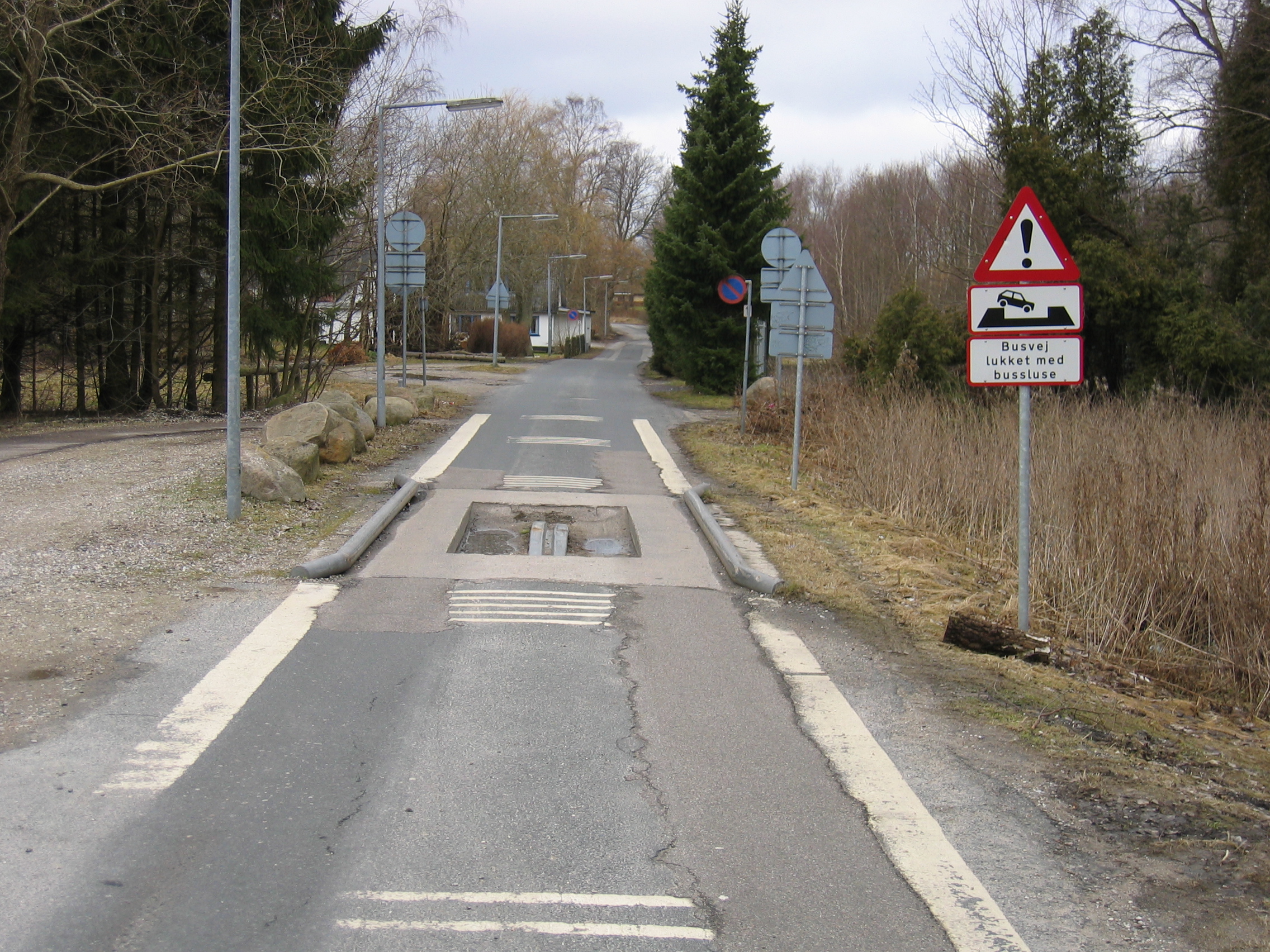 This approach involves architectural features, mechanical and electronic devices, and related means for maintaining prerogatives over the ability to gain entry. Both dynamic measures (moving, acting such as boom barriers or guards) and static measures (passive, such as bus traps or heightened curbs) can function as access control mechanisms.

Another application of access control are environmental zones or low-emission zones (LEZ) with the aim of improving the air quality. Only low-emitting or zero emission vehicles are allowed to a LEZ [[1]].

Various means of access control are feasible, such as:

This measure can be effective to a range of security issues. These are:

For access control to work, one has to make sure that alternative entry routes are made impossible. For example, erecting a control post at a stadium is useless if the entrance next to it is unguarded. This means that for this measure to work, the access control has to be active at all entry points and all other access to the area has to be sufficiently blocked.

In practice this means that this measure usually needs to be accompanied by other measure types, such as target hardening and/or directing traffic flows to prevent uncontrolled or allowing for undesignated entry points.

For access control to be effective in an urban context, the object or area should support a careful consideration of access and exit points, conforming to the use of the object or area. This holds both for the number of accesses and exits and the measures used to enforce it. A football stadium, for instance, can enforce rather imposing access control measures, in some cases extending to screening and the use of violence to enforce it and still requires quick access and exit of multitudes of people. At a service-oriented facility, this type of access control would be out of place and inappropriate and less imposing and more user-friendly measures of access control are required.

Measures to control access to public space should ensure a balance between design for crime prevention and design for the effective use of an environment by legitimate users. Rather than focusing only on organised and mechanical strategies of access control (such as physical barriers), more natural strategies such as territorial reinforcement should be promoted where possible. The clear delineation of spaces (public, private, transitional) serves to reduce ambiguity for users as well as making it easier to identify offenders.

Planning considerations should account for any inconvenience faced by legitimate users, while seeking to design features that will deny offenders access to targets and reduce their possible opportunities of escape. A considered approach will avoid the ‘militarisation’ of spaces in favour of communicating the nature of public, private and transitional areas to users.

Access control measures tend to be highly visible. This can raise the prominence of an object, which can raise the attractiveness of the object for fanatics.

Access control is a technology-based measure to increase resilience. From the social point of view, any technology-based measure should consider that security mainly refers to the people and society. Material measures to protect should still suggest a sense of welcoming, openness, and inclusiveness.[1] Moreover, in public area's technical solutions are not as effective without the acceptance and participation of the public. This acceptance is, among other things, rooted in security culture.

Protective and resilience-enhancing measures directed at infrastructure, such as access control, can have negative impact on resilience of social infrastructure and societal resilience. For example, visible protection such as access control points makes people to underestimate risks but makes them reluctant to adopt protective measures themselves as well. This could undermine societal resilience and limit the effects of other measures that are not based on technology, such as ownership.[2] In addition to this, informing citizens with risks, how to assess risks, and how to prepare for realisation of risks is important.[3]

Practical addressing of social aspects and aspects of security culture in security measures such as access control can be best accomplished by appropriately involving citizens, based on a set of introduced methods of citizen participation as compiled by VITRUV. Ideally, planning for the measure of access control should include usability tests in relevant social context. The sociospatial perspective is an example of an approach to do so.

Access control mitigates the negative (economic) effects of security threats. These economic benefits reach beyond the reduction of material and immaterial damage since security threats also indirectly influence the local/regional and national economies, the so-called secondary economic impact (of crime). Riots, for instance, make investors nervous and have a distinct (negative) impact on tourism.

On the other hand, access control measures require investments such as the relatively straightforward direct expenditures on capital equipment and operational cost (both temporary and permanent), and various types of indirect economic effects (depending on the type of security measures used). The use of access screening by security guards, for example, may imply longer delivery times and disruption of global supply chains and of finely-tuned just-in-time delivery systems[4]. And access barriers like roller shutters or big chain locks are illustrative examples of measures that easily create an unwelcome environment, resulting in an 'unwelcome environment' that creates negative indirect economic effects comparable to the criminal events itself. As a final example, access control measures can cause negative indirect effects for commercial venues like convenience stores. These negative effects are caused by a decrease in accessibility, reducing the amount of customers and increasing the cost of distribution.

In order to decide if the particular use of access control measures make sense from an economic point of view (see the case example below), the urban planner should not just map both the costs and benefits of access control measures for the particular case (both direct and indirect), but also wonder if there exist potential alternative security measures that have a better value for money (benefit-cost ratio)[5]. On top of that, one should always consider how stakeholders (citizens, suppliers, customers, employees, etc.) are affected by the considered measures, and to which extend. Will customers for instance refrain from a visit to a certain shopping mall due to the severe access control measures? And how will potential criminals/terrorists react? Will they easily find ways to avoid the foreseen security measures, or will the access control measure force them to look for other targets (the economics of criminal/terrorist behaviour)? Economic tools can help decision makers to answer these questions and to prevent wasteful expenditures on security.

One effective way to prevent a terrorist bomb attack is to create (physical) distance between an urban object and a potential detonation location (as addressed with the help of the plan and detail level tools in VITRUV). This could be done with relatively expensive security guards at checkpoints outside the premise of buildings, but also with the help of access control measures that by design create a standoff zone preventing trucks and cars to come near a building, for instance with the help of some type of (automatic) bollards or natural barriers (e.g. use of water or trees, etc.).

At closed entrances (if only to a particular mode of transport) information should be made available when and where a person/vehicle might gain access.

Access control in the field of mobility is also applied for congestion charging, for example with the aim to improve the air quality. In London this is applied with camera control with license plate recognition at the entrances/exits of the city.

In public transport, access control is sometimes applied with chipcards and automatic gates. The chipcards can be personnal. Access is only given to people with a valid chipcard with sufficient saldo.

At private (company) parkings, acces is often regulated with an automatic barrier and a pole with communication connection to e.g. the reception desk or chipcard (electromagnetic?) control; only people with a company chipcard or people with an appointment to a known employee of the company will get access.

Identification of people at access control point can raise ethics issues, such as collection and use of personal data. Another aspect are interactions between built infrastructures and human rights (e.g. rights to access and supply). In this context, it is important to consider that access control can have the unintended consequence of systematically excluding certain types of people from access to certain urban space. Therefore, access control can turn out to by a kind of over-sophisticated measure. To prevent issues, one should make sure to be transparent about the discrimination criteria and make sure these conform to anti-discrimination legislation and customs.

In general, pinpointing specific ethics aspects in resilience-enhancing measures needs to consider, among other things, citizen security culture and citizens' personal concerns. There are no ethics considerations that can be planned or implemented without prior identification and addressing of citizens' perceptions. To support this, VITRUV offers a commented list of methods to determine ethics aspects in relevant urban planning.