From Securipedia
(Redirected from Burglary)
Jump to navigation Jump to search 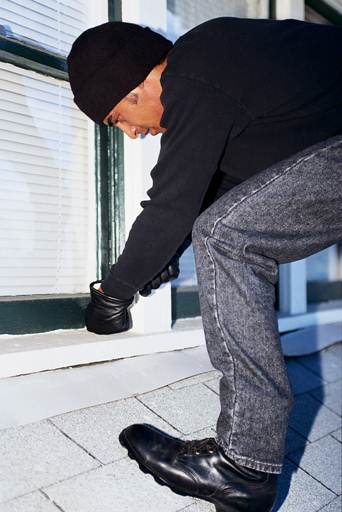 Burglary is the crime of illicitly entering a building or other property with the intent to commit an offence, particularly (but not limited to) theft.

Burglary involves a criminal (most commonly referred to as thief) entering a building or part thereof, that is not freely accessible without permission. All kinds of methods of gaining access are possible, gaining access by ramming a vehicle through a wall or entrance is covered in the security issue Ram raid.

Known circumstances to influence the likelihood or effect of burglary, are presented in the table below:

Burglars know exactly how to find the weak spots around domestic objects. They only need a few minutes to search the object, take the valuables and get out. The modus operandi, in principle, is not to encounter the residents of the property where they break-into, nor to commit violence. Because of the absence of violence, it does not lead to severe psychological distress as is the case of robbery and raid. Still, burglary in the home is a huge invasion of privacy and often has much impact on citizens' general perception of (in)security and increase their general perception of risk. The shock is different for every victim and may depend on the severity of the event, previous experiences and reactions from the social environment.

The social impact could be, resilience enhancement both on an individual and community level, for instance by taking burglarproof measures and increase social control. Also, social media initiatives emerge like ‘How safe is my neighborhood?’[8] that plot the burglaries or attempts within a certain period onto a map. The aim to increase awareness and stimulate residents and owners to take preventive measures. The downside is that these initiatives stir up feelings of insecurity and could lead to a less positive view of the district concerned.

Property crimes such as burglary lead to considerable costs in both a direct (primary) and an indirect (secondary) way[9]. The direct economic impact of burglary in a dwelling crimes are for about 10% the result of preventive measures (security and insurance), and for 55% the result of physical damage and mental harm. The remaining part are costs in response to crime (detection and prevention, enforcement, trial, support)[10]. Burglary is a high-volume crime. In England and Wales, burglary in a dwelling makes up for about 7% of the estimated volume of offences against individuals and households[11]. The average total cost per burglary are estimated to be about £3,250 (in 2003 prices)[10]. This is relevant knowledge for urban planners, since the cost of security measures can be earned back with a reduction of the frequency of burglaries in dwellings, the economic impact of security measures. In addition, the social costs of burglaries are relatively modest compared to violent crime such as homicide, robbery and sexual assault.

Burglaries do not just create direct costs, but also have a lasting social and economic impact on the entire area (secondary economic impact of crime). Obvious examples of these secondary economic effects are reduced house prices and costs of void properties. In general, crime prone areas with a long-standing reputation for suffering from much crime are frequent subjects of high mobility of residents, vandalism, empty lots and buildings, businesses with extreme security measures, etc. The perception of security is a relevant issue in case of frequent burglaries, since signs of broken windows, makeshift security measures around dwellings, blaring alarms and continuous police surveillance do not help to make people feel safe, even though the actual frequency of criminal events has declined. In addition, one could consider the opportunity costs of police and other public services (like health care services for victim support). In sum, property crimes such as burglary act like a tax on the entire economy. It discourages investments by private residents, businesses and public authorities.

Security measures will mitigate the costs of burglaries, but burglars will adapt quickly to preventive security measures in accordance with the economics of criminal behaviour. Although there is no real scientific consensus with respect to the causal relationship between the socio-economic background and property crime like burglary, Australian research, for example, illustrates that long term unemployment amongst young male adolescents has a substantial effect on property crime rates[12]. Two German economists Enthorf and Spengler (2002)[13], however, find that planning-intense offences like breaking and entering, robbery and violence, respond relatively slow to changes in the socio-economic conditions compared to other types of crime like drug and alcohol abuse and violent crime[14]. With the help of economic tools such as social cost-benefit analysis it is possible to overview the costs and future benefits of security measures in order to decide which types of measures are best suited for a specific urban planning situation.

These should be identified before putting your transportation system in place as they have a direct impact on how your system will be managed and designed[15].

Normally, breaking and entering does not have mobility impacts on larger traffic scale, though mobility is a necessary condition for the person(s) breaking and entering in order to reach and get away from the location of issue. The possibilities to reach a certain location, e.g. by public transport, or different road alternatives (over land or water), determine the accessibility of the location. The risk of burglary can be reduced by directing traffic flows in such a way that it is more difficult for burglars to reach their target. As indicated above, multiple accesses and exits to a neighbourhood will increase the risk of burglary because it provides good access and exit opportunities for criminals. Also high amounts of traffic are negative since it increases the visibility of targets. That said, such considerations must be balanced with the underlying urban planning principles which advocate permeability, accessibility and connectivity for pedestrian, bicycle and other vehicular movement from point A to point B. This is particularly the case for large residential areas, where there are limited local services and facilities.

The damage done from the breaking could have impact on the mobility within the building; a broken access door can greatly hinder access for the regular visitors.

A burglary can result in loss of safety for the inhabitants, as a result of the breaking incurred.

Potential measures that can mitigate the likelihood or impact of burglary include: