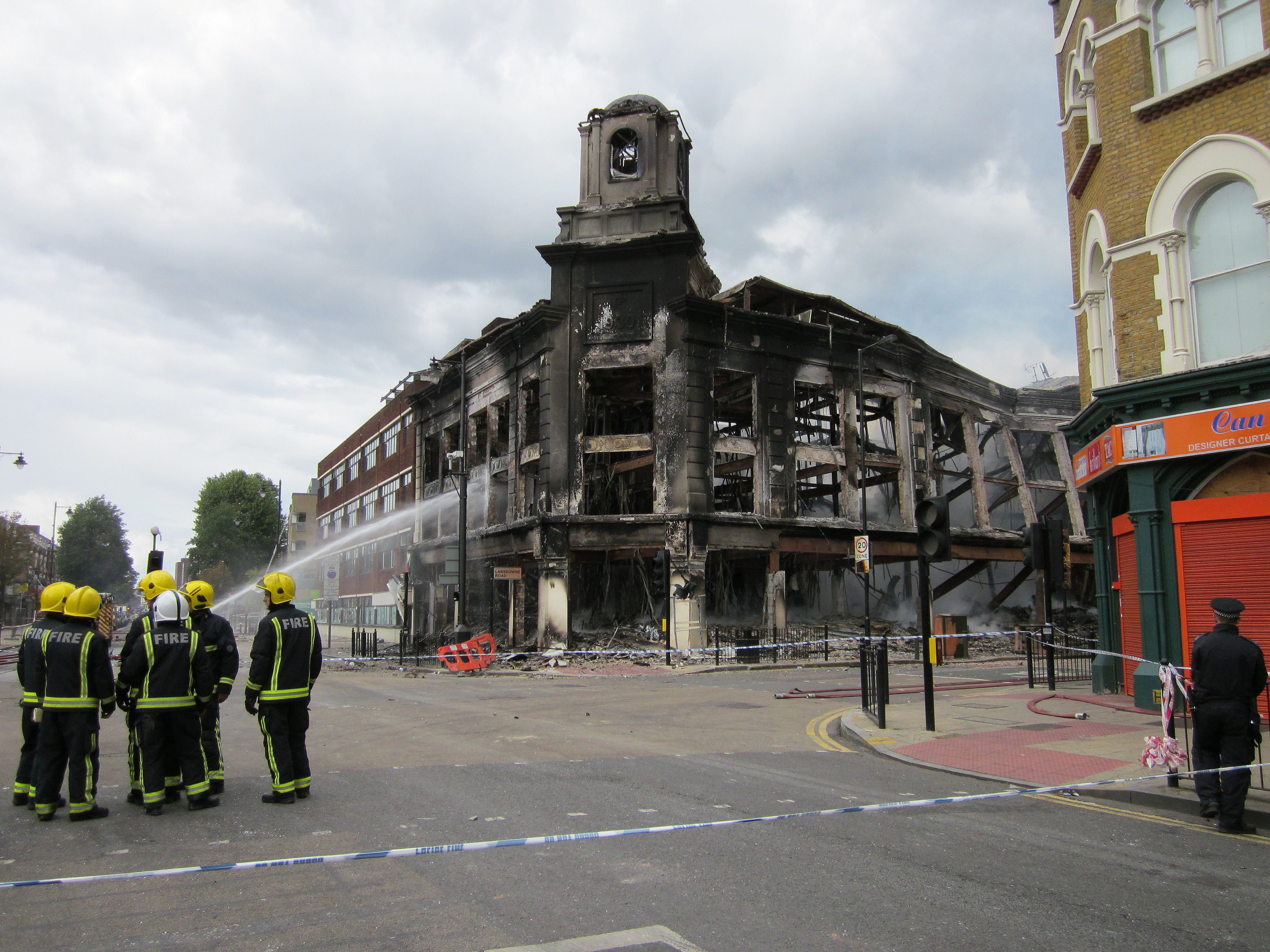 Firefighters douse a shop and flats destroyed by arson during the initial rioting in 2011 in Tottenham, London

Destruction by riots is the act of vandalism of property by groups for a shared rational or rationalised reason.

Riots are physical expressions of discontent by large, mostly unorganised groups of people, expressed in vandalism, assault and/or pillaging. Although the riot may be unorganised, the reason for these people being there may well have a collectively shared motivation. Based on their nascency, three types of riots can be distinguished:

Sometimes peaceful, organised protests can quickly turn into unorganised and destructive riots. Examples of such events are the 2011 events in Tottenham, London[1] and the riots in Rome in October 2011[2]. In these cases the protest, especially when arousing stormy emotions, can turn into a riot when external circumstances provoke strong and emotional responses. 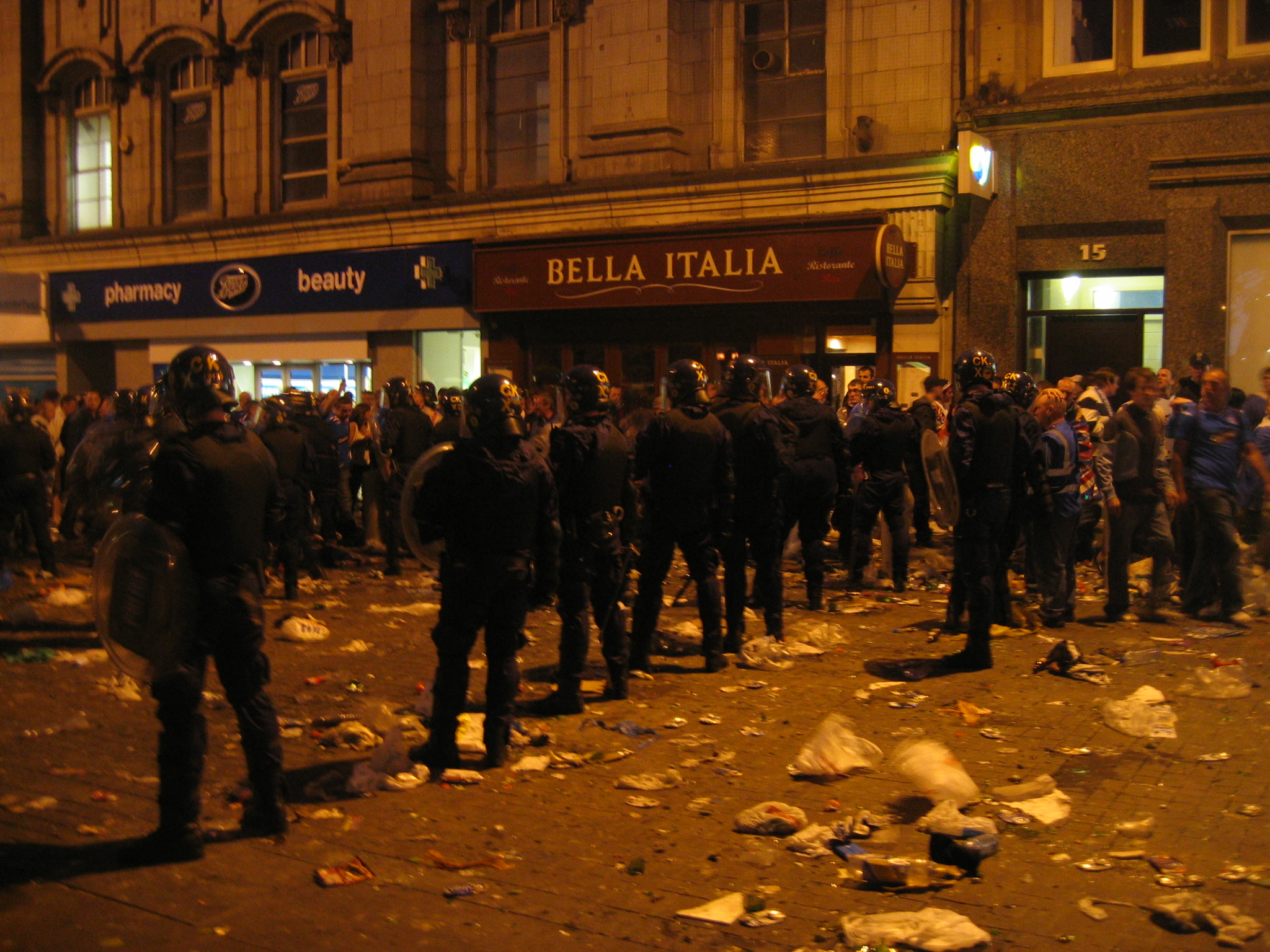 Events which arouse strong emotions, especially when aggravated by a strong sense of competition or the use of alcohol, can disinhibit natural restraint and lead to group processes that can lead to excessive violence. The sport of football has a long history of riots associated with it[3]. These kinds of riots are often associated with a group of agitators, known as hooligans, who instigate such violent actions. 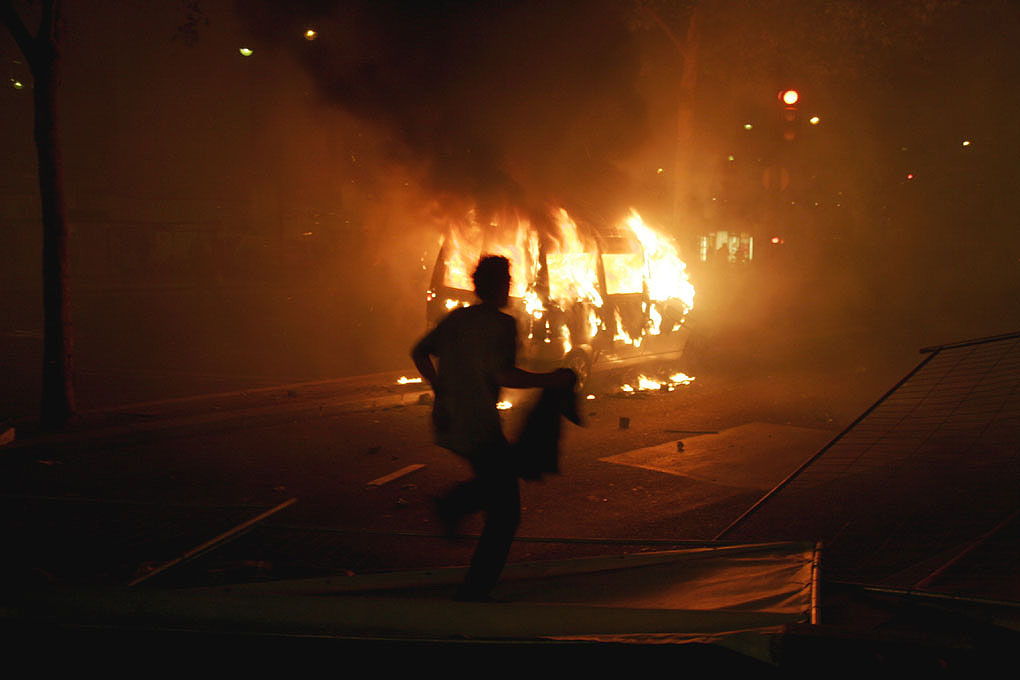 A man runs over a fence in front of a van set ablaze by a group of rioters in the 2007 riots in Paris.

Felt social wrongs can build a common frustration that can release itself in sometimes very violent and wide-spread riots. The 2005 Paris civil unrest, which resulted in a three-month declaration of the state of emergency[4].

Known circumstances to influence the likelihood or effect of destruction by riots, are presented in the table below:

Destruction by riots can have social impact such as increase in citizens' perception of insecurity, fear of crime, and avoiding of the places of the riots. This can result in urban space becoming increasingly more attractive for rioters, with a chain of increasing destruction.

Riots lead to considerable costs in both a direct (primary) and a indirect (secondary) way[7]. Direct costs of destruction by riots come in the form of:

In addition, the secondary economic impact of crime has to be considered:

In theory, security measures can prevent destruction by riots, but not without costs. Target hardening or access control, for example, is costly and there is always the risk of crime displacement[11]. Crime is closely related to poverty, social exclusion, wage and income inequality, cultural and family background, level of education and other economic and social factors[12]. With the help of economic tools such as social cost-benefit analysis it is possible to overview the costs and future benefits of security measures in order to decide which types of measures are best suited for a specific urban planning situation.

Since riots take place at Open and civic spaces, the mobility function of those areas might be seriously hampered. Accessibility might be reduced when, for example, roads are blocked. Also safety of vulnerable road users might be reduced, especially when important bicycle lanes or pedestrian paths are crossing the riot location.

With traffic management measures one can attempt to concentrate the riot at a location with little impact on mobility and to reduce the negative consequences for mobility, for example by rerouting traffic around the riot location.

Access control can ensure only flows of the intended people enter or exit the area and can enforce and intended separation of crowds.

Riots can do massive physical and/or bodily damage, as shown by the examples above. A rioting crowd has very little attention for the consequences of their actions. This is why one of the first measures taken if a riot is already broken out, is to isolate it to limit the damage.

Potential measures that can mitigate the likelihood or impact of destruction by riots include: