Difference between revisions of "Measure: Surveillance"

From Securipedia
Jump to: navigation, search 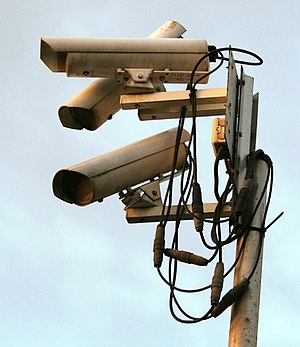 Security cameras in the street
Monitoring with the help of cameras (CCTV) has become a common method throughout all Europe to combat crime and terrorism. In the UK more than 4 million cameras have been installed (The Associated Press, 2007).

Example of an Amber Alert SMS
This concerns involving (a select part of) the public in the detection of crime. This can both be facilitated by electronic means and more traditional means. Examples of both approaches can be found in:

Whether the costs are making sense from an economic point of view, depends on many factors, and can be answered by two distinct sets of questions (see also the flow chart of an economic assessment):

Stewart and Mueller (2008)[9] performed a cost-benefit analysis of the Federal Air Marshal Service and hardening cockpit doors as security measures against terrorist events like 9/11. They conclude that even if the Federal Air Marshal Service prevents one 9/11 replication each decade, the $900 million annual spending on Air Marshal Service fails a cost-benefit analysis at an annual estimated cost of $180 million per life saved (compared to a societal willingness to pay to save a life of $1 - $10 million per saved life). On the other hand, Stewart and Mueller [10] conclude that with $40 million per year, target hardening of cockpit doors is one of the most cost-effective security measures with an annual cost of $800,000 per life saved.