Difference between revisions of "Transport Infrastructure"

Infrastructure is basic physical and organisational structures needed for the operation of a society or enterprise, or the services and facilities necessary for an economy to function. It can be generally defined as the set of interconnected structural elements that provide framework supporting an entire structure of development.

The term typically refers to the technical structures that support a society, such as roads, water supply, sewers, electrical grids, telecommunications, and so forth, and can be defined as "the physical components of interrelated systems providing commodities and services essential to enable, sustain, or enhance societal living conditions."

A road is a paved surface to facilitate the movement of people or goods with [#_Road_transport road transport] means, such as as automobiles, bicycles, buses, vans or trucks.

Roads on itself are not an interesting security target, but blocking a road will cause problems with the traffic flow and reachability of certain parts of the city or area. This can be prevented by designing a [#_Robustness robust road system] and to detect a disruption and minimize the consequences, using [#_Traffic_monitoring monitoring] and [#_Traffic_management_1 traffic management].

Rails are the infrastructure for [#_Rail_transport rail transport].

As for roads, rails on itself are not an interesting security target, but blocking a railroad will cause large problems with the rail transport. 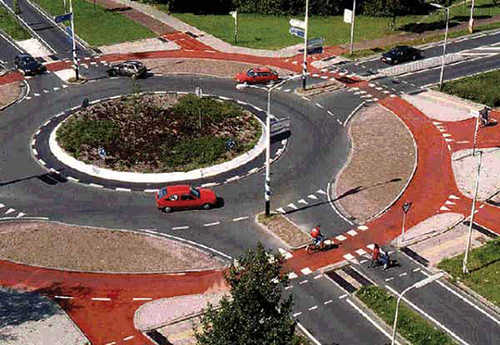 Delineated bicycle and pedestrain paths at roundabouts in The Netherlands

Pedestrian paths or sidewalks, curbs, pavements, footpaths or platforms are paths alongside a road designated for pedestrians. Bicycle paths comprises of several different forms of cycling infrastructure, from non-segregated pathways aligned next to the road to segregated cycle facilities.

Segregated cycle facilities are a form of cycling infrastructure consisting of marked lanes, tracks, shoulders and paths designated for use by cyclists and from which motorised traffic is generally excluded. The term includes bike lanes, cycle tracks, separated bike lanes, road shoulders and side paths located within a road right-of-way[1].

Inter and intra urban transport over waterways such as canals, rivers or other waterways forms a smaller although still important aspect of the urban transport system. For port cities such as Rotterdam, Antwerp or Hamburg the waterway system is of vital importance for their economic development. Security of waterways are important for securing the urban area and are described in more detail on the specific page. 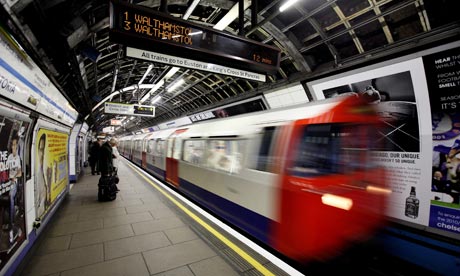 A rapid transit, underground, subway, elevated railway, metro or metropolitan railway system is an electric passenger railway in an urban area with a high capacity and frequency, and grade separation from other traffic. Rapid transit systems are typically located either in underground tunnels or on elevated rails above street level[2].

A bridge is a structure built to span physical obstacles such as a body of water, valley, or road, for the purpose of providing passage over the obstacle[3]. A flyover is a bridge, road, railway or similar structure that crosses over another road or railway forming a grade separation[4]. Various different designs are possible depending on the length of the span and the conditions of the site.

A terminal is any location where freight and passengers either originates, terminates, or is handled in the transportation process. Terminals are central and intermediate locations in the movements of passengers and freight. They often require specific facilities and equipment to accommodate the traffic they handle[5].
Terminals may be used both for interchange of passengers and cargo.

Examples of terminals for cargo are warehouses, trucking terminals, refueling depots (including fueling docks and fuel stations), and seaports.

All terminals are important for security, since it are potential targets for terrorists. Damage will have a big impact, both economically, life danger of people and by hampering the transportation process heavily. Therefore it is recommended to have an extensive and robust transportation system towards and from the terminal and to locate terminals outside urban areas.

An airport is a location where aircraft such as fixed-wing aircraft, helicopters, and blimps take off and land. Aircraft may be stored or maintained at an airport. An airport consists of at least one surface such as a runway for a plane to take off and land, a helipad, or water for takeoffs and landings, and often includes buildings such as control towers, hangars and terminal buildings[6].

A train station, also called a railroad station (mainly in the United States) or railway station (mainly in the British Commonwealth) and often shortened to just station, is a railway facility where trains regularly stop to load or unload passengers or freight. It generally consists of a platform next to the track and a station building (depot) providing related services such as ticket sales and waiting rooms[7]. 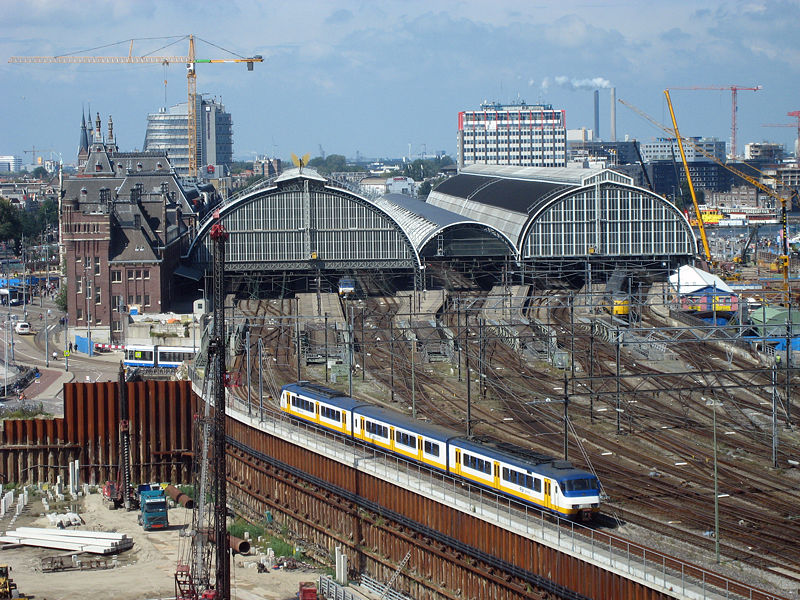 Amsterdam Central Station in The Netherlands.

A bus terminus is a designated place where a bus or coach starts or ends its scheduled route .

A freight terminal is a processing node for freight. Most freight terminals are located at ports. They may include airports, seaports, railroad terminals, and trucking terminals. Freight is usually loaded onto and off the transport[8].

A port is a location on a coast or shore containing one or more harbors where ships can dock and transfer people or cargo to or from land[9].

To prevent incidents at road intersections, the traffic can be controlled with traffic signals.

Traffic intersections are an attractive target for terrorists, since damaging an intersection has larger consequences in terms of disrupting the traffic flow and number of possible injuries than for a road segment.

The concept of critical infrastructures (CI) and CI sectors is not self-evident. Rather, the sector designation is a permanent process of awareness rising on the political level, characterized by spatial and temporal variation and influenced by various national trends, by the political situation and current crises and disasters. Involving increasing accuracy and detailed perspectives, the process is dependent on public and trans-boundary discussion and views, but also on subjective/political perception, region-specific priorities and economic values. [10].

Predominant consensual sectors are physical-technical infrastructures such as energy infrastructures, ICT (information and communication technologies), water and transport infrastructures. Conversely, socio-cultural sectors (including administration, authorities and government units, security and emergency services, scientific, cultural and commercial facilities, media, but also the chemical and CBRNE-(chemical, biological, radiological and nuclear explosives)-related industry currently are rather heterogeneous in designation. Divergence in the assessment of criticality generally results from diverging national situations and (legislative and cultural) preconditions: Are there culturally valuable goods? Are there hazardous chemical and industrial goods? Are there security facilities? In case of positive answers to such questions, these sectors usually are assessed to be critical and risk prone both in definition and in the political perception and discourse.

In the EU, critical infrastructures are those physical and information technology facilities, networks, services, and assets, which, if disrupted or destroyed, would have a serious impact on the health, safety, security, economic well-being of citizens or the effective functioning of governments in EU Member States countries. The Council Directive 2008/114/EC on the identification and designation of European critical infrastructures (ECI) and the assessment of the need to improve their protection[11] provides commonly adopted definitions of “critical infrastructure” and “European critical infrastructure”. Basically, owners, operators and respective member states hold the responsibility for CIP. The EU encourages the member states to set up national programmes for designation and qualitative and quantitative aspects, to accomplish sector identification and dependency studies and to elaborate a common terminology, general criteria, guidelines and procedures as a first step. Further steps include identification of deficiencies, suggestions for measures and financing, the implementation of minimum protection standards and their surveillance.

The EU-Directive 2008/114/EC introduces a practice to identify and designate European critical infrastructures (ECI), committing each member state to designating potential ECI according to the EU-definition and according to cross-sectoral criteria (casualties, economic and public effects) and sector specific criteria (taking into account individual sector characteristics). Further criteria to be considered, as addressed in the European Programme of Critical Infrastructure Protection (EPCIP), [12] are geographic scope of impact (when disrupted or destroyed), severity and consequences (public, economic, environmental, political and psychological effects, public health consequences) or geographic and sector specific dependencies.

The EU approach so far has covered the following critical infrastructure:

EU criteria for criticality refer to cross-cutting criteria described as:

The EPCIP points out the all-hazard approach (prioritizing terrorism) and the principles of subsidiarity, complementarity, confidentiality, stakeholder cooperation, proportionality and sector-by-sector approach [14]. The framework comprises the identification and designation of CI, an action plan, the establishment of a Critical Infrastructures Warning Information Network (CIWIN) and a CIP Contact and Expert Group; further the support of the member states, a contingency planning and the external dimension. The objectives to guarantee European-wide adequate and equal protection levels, minimal single points of failure and rapid and tested recovery processes were defined earlier on [15]. Together with the EU Member States, the European Commission will develop guidelines and thresholds for criteria application. As a first step the directive addressed the energy and transport sectors differentiating subsectors for each (electricity, oil, gas respectively road, rail, air, inland waterways transport, ocean and short sea shipping, and ports).

The systematic analyses of citizens' perceived criticality of infrastructure and necessity to protect it is an essential component for the determination of security demands as a public good, also as related to strategic urban planning. A state of the art review leads to the following indicators for citizens’ subjective needs to provide for protection of critical infrastructure, as well as of their over-perception or under-perception of the criticality of that infrastructure.[16] The determination of the perception of criticality of infrastructure and related protection requirements is not only an important subjective component, influenced by generic laws of human risk perceptions as well as by cultural features, that needs considering in sector designation and prioritization of protective measures for built infrastructure. It is also in important factor to consider in urban planning that seeks legitimacy and public acceptance.

Knowledge of such kind can for example help urban planners to design in protective measures that not only reflect objective vulnerability but also citizens’ security cultures. Thus, public support for urban planning that is conscious of security aspects can be enhanced and citizens’ acceptance of resulting built infrastructure enhanced.

From this list of indicators, it also follows that subjective protection requirements, similar to risk perception, highly depend on individual level of information and knowledge, and thus strategic urban planning should be accompanied by a full-fledged public communication strategy in addressing security aspects. Personal experience and confrontation with critical infrastructure breakdown play an essential role in citizens’ subjective perception of criticality and requirements to protect, as does the individual direct use of the respective critical infrastructure.

Impact of critical infrastructure failure on citizens and society[17]

Types of impact of critical infrasture failure on citizens and society

Critical infrastructure protection (CIP) has become a major issue in civil security, emergency management and natural hazard management. The all-hazard approach has gained ground on the international scale, and the comprehensive approach in security policies and security research has been advanced in order to meet current and future threats based on better integrated information, assessment, policies and capabilities. Critical infrastructure (including critical services) protection also has some important societal aspects.