Vandalism is the act of wilful or malicious destruction, injury, disfigurement, or defacement of property without the consent of the owner or person having custody or control. By this definition, this category includes defacement, such as graffiti. However, in order to keep this security issue limited and surveyable, this act is defined as a separate security issue. Also, wilful destruction performed by an 'organised'[1] group for a shared reason is dealt with in the security issue 'destruction by riots'. In the sense we use the term here, it will therefore only include physical damages, excluding defacement, motivated by other than rational reasons.

The typical vandal is a young (adolescent) man, in a (small) group (but not organised) or alone. Youngsters prone to vandalism also often appear to have a poor understanding of the impact of their behaviour on others, and are primarily concerned with the consequences of such behaviour for themselves, such as getting caught. In their view, public property in a real sense belongs to no one[2]. Vandalism appears to be useless, but one can better understand the behaviour of a vandal when considering it in the context of adolescence, when peer influence is a particularly powerful motivator. Most delinquent acts are carried out by groups of youths, and vandalism is no exception. Participating in vandalism often helps a youth to maintain or enhance his or her status among peers. This status comes with little risk since, in contrast to playing a game or fighting, there are no winners or losers[3].

Known circumstances to influence the likelihood or effect of vandalism, are presented in the table below:

Known social impacts of vandalism include changing citizens perception of (in)security and fear of crime. This usually happens in a way that has an effect on the gap between "felt" and "factual" security, since individuals tend to make - correct or incorrect - reasoning on societal security as a whole based on immediate environmental clues. This is known as the "broken glass phenomenon".

Vandalism leads to considerable costs in both a direct (primary) and a indirect (secondary) way[9]. Direct costs of vandalism come in the form of:

The average costs of an act of vandalism are estimated at around € 700 for the Netherlands and € 900 for the UK (2005 prices)[10]. In addition, the presence of vandalism can trigger secondary economic impacts. Vandalism can make the local environment an unpleasant place to live and work, creating a significant negative impact on real estate value and local business revenues[11]. Crime prone areas with a long-standing reputation for suffering from much crime are subjects of high mobility of residents, vandalism, empty lots and buildings, businesses with extreme security measures, etc. On top of that, vandalism can lead to less public funding by local authorities (in terms of investments in social infrastructure). As a result, "crime-prone areas usually stay that way"[12].

Vandalism may hamper mobility and mobility related services. For example, a frequent target of vandalism are bus shelters, by damaging e.g. the glass windows of the bus shelter. Damaged bus shelters will give an unsafe feeling to bus users while waiting at the bus. This may lead to less people using the bus. 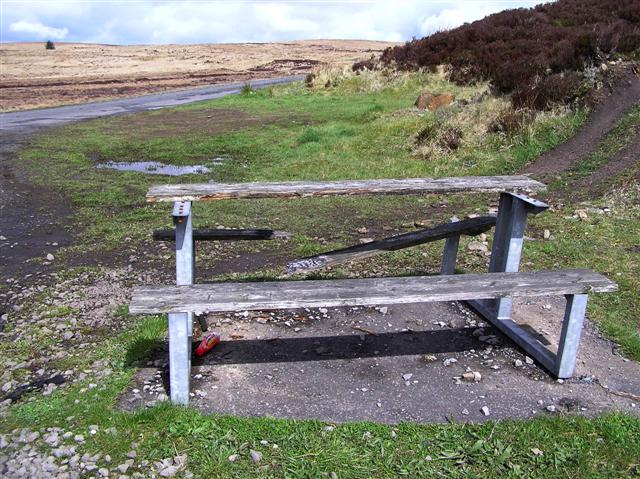 Vandalised picnic table, showing sharp edges and unfit for use

Destruction of safety features (such as traffic signs, fencing around dangerous areas or in child-safe playgrounds) can lead to dangerous situations and safety hazards. It can negate the functions of objects, such as providing shelter, lighting or ensuring sanitary conditions. Also, the destruction itself can generate dangerous situations by for instance broken glass, loose nails or splinters wounding people.

Potential measures that can mitigate the likelihood or impact of vandalism include: