An exhausite listing of all crime types distinguished in the various countries of Europe would not be useful, as this would encompass local regulations and crimes not relevant in an urban context. This is why we developed the categorisation of Security issues, a listing of the crimes that are of prime concern to the urban planner.

The following classes of offences are used, or have been used, as legal terms of art:

There is no uniform categorisation of crime used all over Europe. Rather, each country uses its own system to classify and record crime, but at a very generic level, the collected statistics are reported to a central European database, called eurostat yearly[3]. The crimes in this database concern the following six categories:

The US statics, recorded by the Criminal Justice Information Services, a subdivision of the FBI, drill down to a much greater level of detail[10], but at the highest level of subdivision only

The UK crime statistics, recorded in the annual report 'Crime in England and Wales'[11], uses still another categorisation of crimes, the highest subdivision of which is:

An indication of the relative size of crime types recorded in the eurostat database and their development through the years is given in the figure to the right.[12]. In this figure, we can discern the large differences in rate of occurance between faily commonplace crimes, like vehicle theft or violence and more extreme crimes, like homocide. 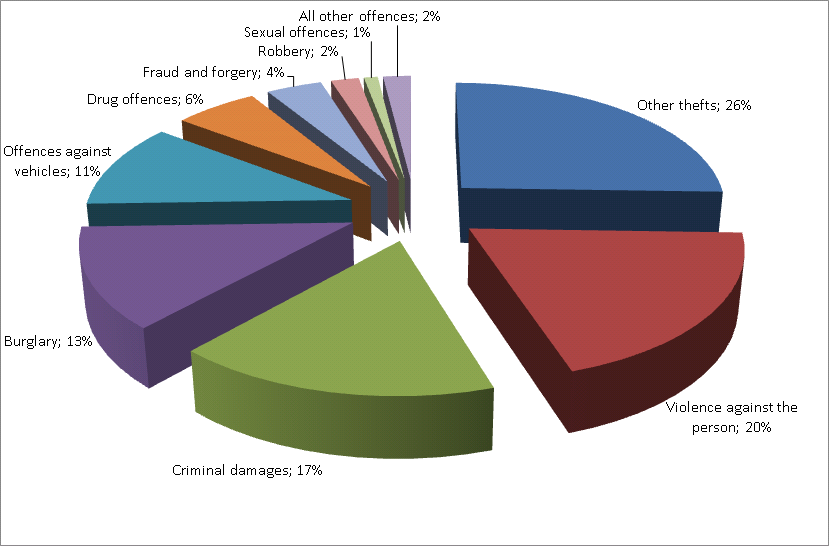 Crimetype statistics in England and Wales

As an illustration of the variability in the way and level of detail crimes are recorded in the various member states, the crime statistics of England and Wales of the year 2010-2011[13] are presented in the figure to the right.

It is therefore important to reconcile the idea of security with that of community.[14] This can be done, for example, by including the concept of security culture into concepts for urban planning.

Critics have reprimanded any "clubbing of private security", which in their view contributes to the deconstruction of security as a public good, to the benefit of a short-sighted approach of mere physical risk reduction.[15] This includes scepticism of approaches to urban planning such as the "designing out" approach, as well as any production of security by use of exclusionary practices.[16]